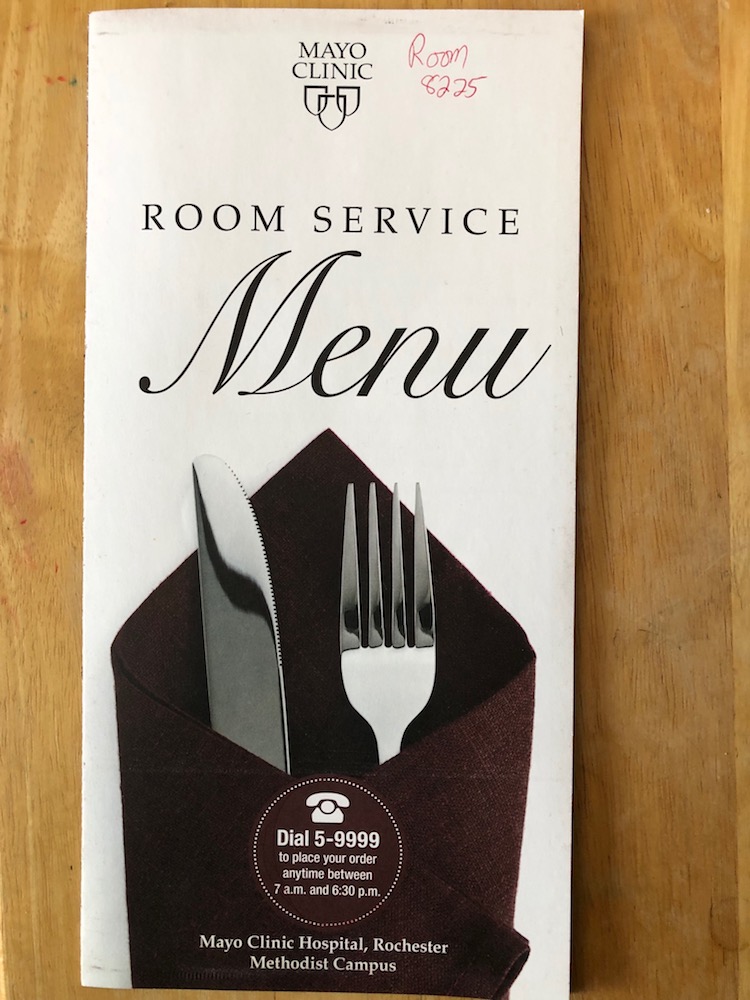 From calling the night before, my girlfriend Chris learned we needed to report to the hospital at Mayo at 5:30am so we got up early and got ready.

The morning weather was still merely very cold vs the incredibly cold it would become so we got up, I got the car warmed up and we were on our way.

They process admissions in 15 minute groups in the early morning and we were the first group and everything was fast and efficient. The pre-op rooms are as competently luxurious as the rest of the place. By 7:15am Chris was on her way. I was told where her room was going to be so I headed up stairs.

The orthopedic floor was very quiet when I got there. I think they had very few patients in rooms and it was like a ghost town. But they weren’t expecting anyone to be moved onto the floor for a couple of hours so that made sense.

As Chris’ official contact at the hospital, I was added to a text message alert system so I got texts through out the process so I knew where she was and what was happening as far as start of surgery, end of surgery, recovery. It was nice and I relayed messages to a couple of group chats we set up with Chris’ friends and family.

I was pretty anxious and was glad to get texts about things wrapping up and her going to the recovery room. The hip replacement itself seems like it took about 90 minutes and she was wheeled into her room.

She came through it all well, the room is comfortable, staff is great. There is no regular meal service, you simply order from the “Room Service” menu between 7am and 6:30pm.

Chris didn’t have much appetite at first but for her second meal she noticed you could get a milkshake with your meal and that made sense for every meal after. You get an entree, up to 3 sides, beverage, and dessert.

You can also get a massage. I don’t think they have a full spa, though…

Chris had a couple of meetings with Physical Therapy and was able to stand up and take a couple of steps at the first meeting and did a little more at a second meeting though she was pretty tired by then.

I spent my time keeping Chris company, occasionally going out to the car to make sure it would still start (it’s cold outside), and a couple of times seeking out food via the underground tunnel system that connects the Mayo to several blocks of downtown Rochester.

By the end of our stay I got better at navigating underground. It takes some practice and I tend to go the wrong direction until I figure out where I am again.

Around 7 or 8pm I carefully drove back to the hotel. I think it was somewhere between -10 and -20 according to what the car thermostat said.