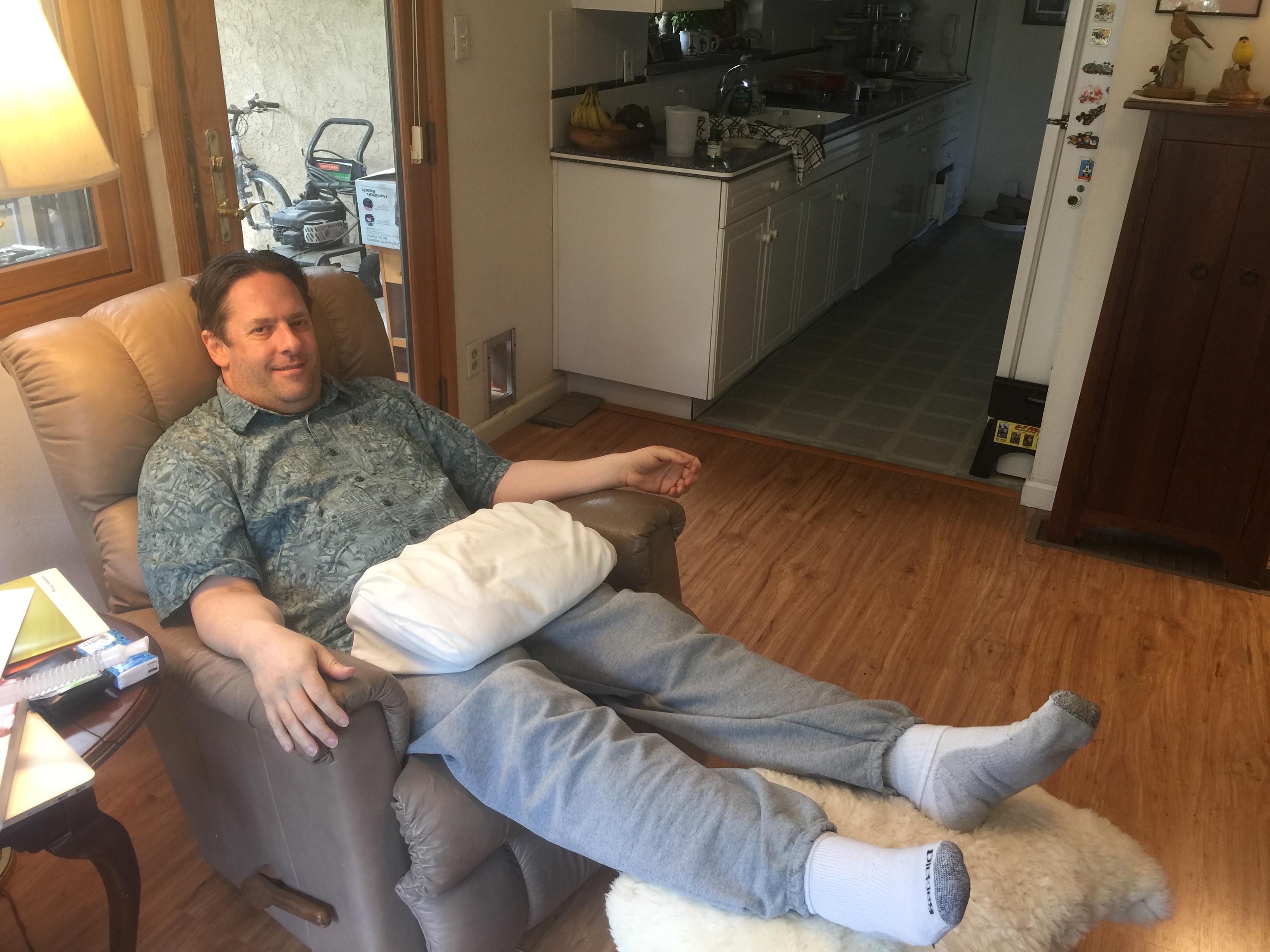 From my past hospital experience and from the regular questions of the nursing staff, I knew the thing that could ultimately hold up my hospital release was whether I had a bowel movement yet.  On one hand it seems petty compared to everything else I’ve gone through.  On the other hand, I agree it is important to verify that everything is still hooked up right inside of me from end to end.  The night staff was surprised, I think, by how enthusiastic I was to get this taken care of.  The problem in my case is that it is hard to restart that part of your body after surgery in the best of cases.  Additionally, there is no safe way for me to bear down or strain to help things move because doing so puts extra stress on the heart and on muscles around my poor chest.

For the prior two nights I had a dose of milk of magnesia which didn’t produce results.  (“ohh, it sort of has a yummy chalky minty flavor!”.  remember, everything tastes interesting to me now).  I tried taking a brief walk around 4am with the final step being a suppository at 6am.  I was told that normally they don’t worry about bowel movements so much until day 4 but I was excited that there not be a day 4.  Though I was also very willing to do whatever I was told because I want a nice safe simple boring recovery.  After an hour wait, I achieved the expected result and during shift change, the charge nurse responded to my call button and laughed at the formality of my request that she verify in the toilet what I had done.  With that final step completed, all we had to do was wait for the physicians assistant to stop by.

While we wait, here are a couple brief notes about the cardiac health class I attended the day before.  The class was informative and reinforced things I had heard before during my stay.  The section on nutrition was unsurprising.  They encourage the discredited orthodoxy of a “heart healthy” low fat/high carb diet.  At least there was an emphasis on avoiding processed foods.  The presenter I suspect was herself vegan and she felt both butter and margarine are equally toxic.  I’ll talk more about food in future posts.  I have strong differing views on what makes a healthy diet.

There were also cautionary tales of things not to do.  Like there was the guy who was biking 16 miles a day one week after surgery.  Granted he wasn’t putting more than 10 pounds of pressure on his arms nor was he driving a motor vehicle.  Just risking painful death if he fell.  I think in that case he sprung two of the wires holding his sternum together but the rest kept holding so it was ok.  There were some other stories that we sadly cannot recall.

In my case I had learned that my surgeon does something extra when putting me back together.  In addition to the stainless steel wire wrapped around the two halves of my sternum to keep it in place so it can heal back into one bone, he also implanted a titanium plate bolted to my sternum in 4 or 6 places to give it extra stability.  I was really happy to hear that and feel anything to keep me more stable while I heal with increase my peace of mind.

As I have gotten more mobile, I’ve had a chance to look at myself.  The long incision in my chest, smaller one in my right leg.  It was shocking to see at first.  However, I accept it had to be done and I’m very glad to be able to stand every day and look at the healing process.  Much better than the alternative.

A different physicians assistant came in today to check on me and we talked more about day 3 release.  Everything seemed fine to her and she was going to check with the surgeon and other staff.  A bit later the clearance was given and paperwork processes started.  Yay.

The jumper cables and neck port still needed to be removed.  The neck port was easy.  The wiring, though, was very painful.  They were thin wires and the place they went in was well below my heart so some force had to be used to get them around the corner.  Like what you might use with a wire cheese slicer.  This is why I don’t like to know so much.  Too much imagination.  Breathe in, hold it.  Ohmygodthathurts as I’m crushing my girlfriends hand in mine.  Her hand made it and after a second pull, the wires came all the way out and that part was over.  My girlfriend had to get to the airport after that and we said our goodbyes.

Final checkout with the day nurse was amazingly thorough.  I came away with about 30 pages of documents with my instructions, medicine schedule, follow up appointments already scheduled and review discussion about wound care and showering.  I would finally get to shower 24 hours after the neck port was removed, 12:15pm on Saturday.

They offered I could stay for lunch since it was around that time and I did and then transport was called a little after 1pm.

The elevator doors that lead to the downstairs lobby are golden.  Nice effect.  And it was nice to get into my mom’s car and drive away.  We made it to her house and I was set up on the recliner in their living room.  I found that with their house being larger than my hospital room, routine living was more tiring.  Going to the bathroom, dining room, back and forth.  Definitely more activity for me and tiring.

And there was the buzzing in my chest.  We got home and walked in the door and I felt a distinct buzzing like when your cell phone is in your pocket on vibrate.  Weird.  Nothing like the grinding or popping noise I’m to watch out for which means my sternum is doing something really bad.  But weird.  It happens a few more times and I decide to try out the cardiac nurses line.  Kaiser, my medical provider, has a pool of specialty cardiac nurses on their own separate advice/support line.  I met with one twice while I was in hospital and she knew I was doing well, and was in good spirits, and had a sense of humor.  So when I reached her and described what was happening, she was able to ask me if my cell reception seemed any better as a result.  You know, metal plate, buzzing feeling, etc.  Funny.  She thought it was weird and would ask doctor but it didn’t seem dangerous.

And after the fact, I thought about the fact that most of my chest was numb.  As is most of the inside of my right leg from knee to ankle.  I have been lucky in not having very much pain out of this because most of the parts that were operated on had no sensation now.  But as sensation comes back, there are likely to be weird feelings.  We chalked up the buzzing to that.

I wrote out detailed notes myself about my medicine schedule and made a check list.  A couple of the medicines are taken only if my BP and pulse are above a certain level I have to check that twice daily.  I also need to take my temperature twice daily to check for fever.  And if my weight increases by 2 pounds or more over two days call the doctor because that might mean fluid build up.

I was very tired so around 8:30 I went to bed and was reminded how hard it is to get into beds.  And fluff pillows.  And lay on my back, legs elevated on pillows, all without using my arms or elbows much and trying to avoid uncomfortable torso twists.

By morning I was back in the recliner which was much easier to get in and out of.