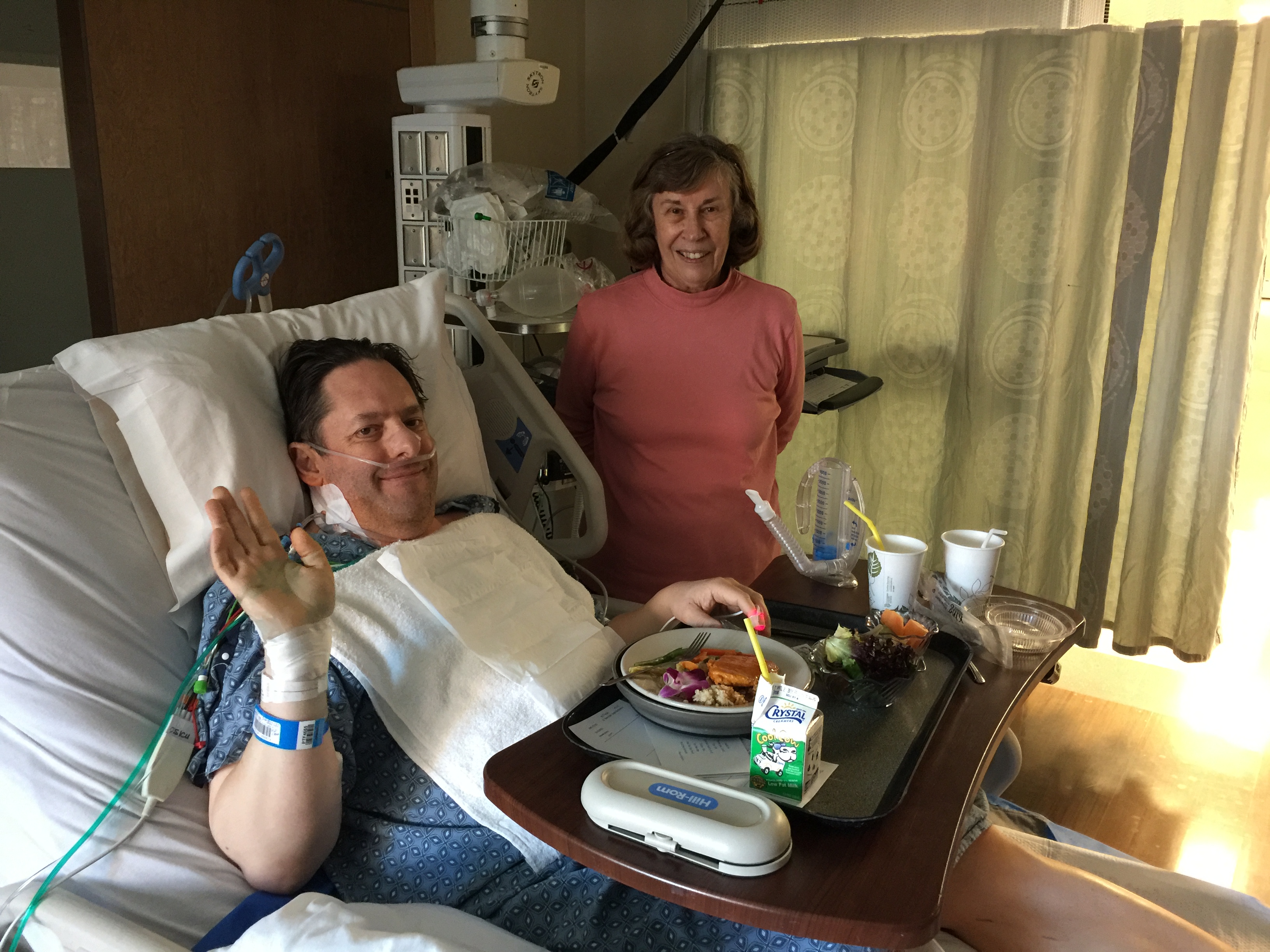 I made it through the night.  It was nice not to have to worry about surgery or medical procedures coming up anymore.  There were bouts of muscle pain from movement here and there.  My vitals were checked regularly and I was given meds at different times.  Ice chips were amazingly good.  That was all I got at first to manage my thirst.  They were so good.  Such a pleasant experience.  These silly little things seem so significant at the time.

My surgeon and a doctor I had not met before came in at 7am.  The doctor especially seemed visibly surprised by how relatively good I looked.  I don’t recall exactly what we talked about but he gave the order that the chest tubes could be removed.  Everything looked good.  My vitals were strong.  I was doing well.  Really, really well.

Family and my Girlfriend arrived some time later.  At some point DaughterB came back for a while as well.  I was able to talk about stuff off and on and sometimes I took little naps.

At 10am, the chest tubes got removed.  The day shift nurse was really good.  He didn’t normally work in this department and my group thinks they heard him say he was a travel nurse who was pulled in to this shift at the last minute.  He was leaning on the charge nurse some to find where things were stored around the department but he was very good.  Both of them came in to remove the tubes.  This was nice because when they remove the chest tubes, it feels like long thick worms are being pulled out of you.  And there are three of them so extra hands help.  It wasn’t a painful process.  Certainly not as painful as the INCREDIBLY PAINFUL cramping I was still having, but mostly it was a weird feeling.  As if long, THICK, worms were being pulled out of your skin.  They offered to show them to me and at a glance, they looked like they were about 1/2″ thick and 6″ long.  Those were in me?  Yes, to drain out fluids.  Huh.  There were 3 of them.  Thick.  Ugh.

On the plus side, with them gone, my chest Charley Horses went away.  That was a really wonderful thing.  Everything was much better after this.

There was also discussion around this time of releasing me from ICU.  Typically, open heart surgery patients are in the ICU for 2-3 days for monitoring and drainage, getting highly controlled substances to manage pain, and monitoring of lots of data read by pinging machines in real time.  However, I was stable.  I was alert.  Talking to people.  Vitals looked good.  I was really happy to be alive and more than happy to share that with people.  I didn’t seem to need as much intensive care as usual so a search for a room was started.  The nursing staff said this was a really amazing and positive sign.  We were all pleased.

I had an initial meeting with my physical therapist that day.  And somewhere in there I received my safety pillow.  My safety pillow is my friend.  More so those first few days but I still keep it by my side.  It is a half sized pillow that I clutch to my chest when I cough.  Since my sternum was broken, it needs to be kept stable so it will heal and I can go back to normal.  Standard technique is to hold the pillow to cushion your chest when coughing.  It also keeps you from using your arms when you stand since for the next 3 months I can’t lift more than 5 pounds per hand or 10 pounds total.  I should not raise my arms above head.  (Except I was advised to do it carefully twice a week, otherwise I’ll lose all motion above my head.  Check with your personal PT expert.)  Don’t use arms to get out of a chair.  Follow those rules and you will heal well.  Don’t follow those rules and I don’t want to think about the outcome.

During this time I had also been introduced to a breathing tool called the Incentive Spirometer.  It is a tube you inhale from which raises a piston.  The goal is to inhale more and more to help build up lung capacity.  During surgery, your lungs are collapsed.  They get full of gunk and stuff from the anesthetic and it is vital to get them back to normal afterwards for better breathing and to reduce the chances of getting pneumonia.  Before surgery, I could get my breathing toy up to 4000ml which is the max.  Day 0, I could get finally to 1000ml from starting at 500ml.  They want you to use it 10 times an hour when awake and this is very important.  Day 1, I had dropped back to 750ml but worked it up higher during the day.

Around 2:30pm we got word that I could be transferred to a regular room and off we went.  My crew carried my belongings and I was rolled away.  My new room was nice.  These are all private rooms.  I was introduced to the new nurse and more vitals were taken.  It was nice to have fewer and fewer tubes and wires over time.  At some point a line had been added to my neck from which BP could be measured live and they could do blood draws.  My right arm had gotten pretty messed up from repeated needle sticks over the previous couple of days.  Giving the lab staff an easy way to draw blood from me was really handy.  I was tired of getting poked.

In my new room, I was helped over to a chair which was a wonderful novelty.  Visits with family were good.  Everyone continued to be relieved, of course.  Later, dinner was quite good.  I generally thought hospital food was pretty good.  Though actually I was enjoying everything.  Even the bright pink liquid potassium supplement they gave me from time to time.  It was pink and sweet and a little fizzy.  I could taste it.  Yay.  Hospital food was the same way.  I could eat it with a fork or spoon and taste it and it made me less hungry.  It was amazing.  I was enjoying myself as much as I could.