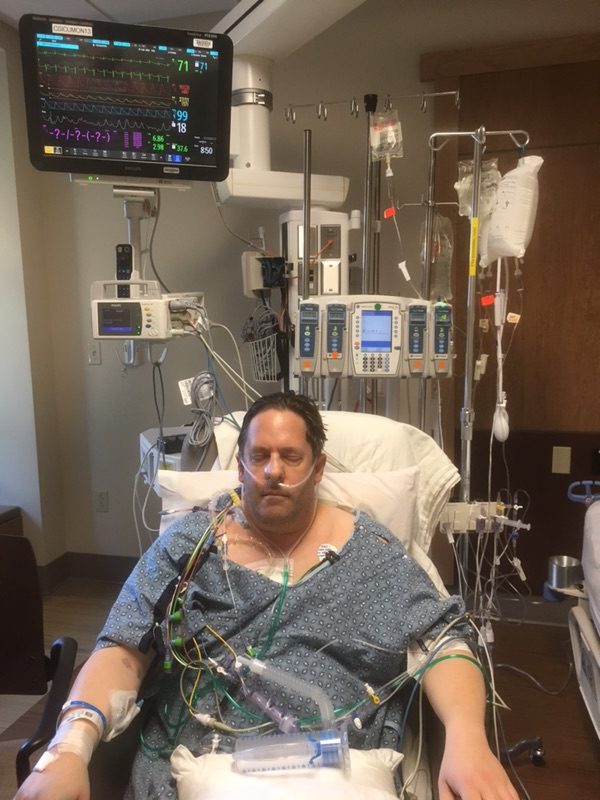 Eventually I made it through the night.  My Girlfriend had agreed to arrive back at the hospital around 5:30am since showtime could be as early as 6:15 and her presence was a great comfort.  As promised, I was given a little something to help me calm down before I was rolled away.  One pill.  Within 5 minutes I thought maybe I was feeling more calm but maybe it was just my imagination.  Within 10 minutes it really exceeded my imagination and I really didn’t care what happened next.  It is so nice when hospitals want you to be relaxed and comfortable.  And floaty.  And calm.  Hmmm.

It was time, I was wheeled away and my Girlfriend was able to tag along about half way before our paths diverged.  A hug and kiss and I was on my way.

I’m pretty squeamish about surgery related medical topics and how they relate to me.  I don’t want to know a lot of graphic detail.  I don’t tend to ask a bunch of questions in that area. (I was given the option to watch a video about open heart surgery the night before and I politely declined, for example.)  However, I was curious what happens to the ends of the veins that are left in me when they remove them for grafts.  Do they have to stretch them and re-connect?  Wouldn’t that end up being tight?  Maybe veins are stretchy?  There were a few moments to wait outside the OR while they were getting ready, just the nurse moving my gurney and me.  Then the physician’s assistant came by who would be responsible for getting the veins and I asked her.  She said they just close off the ends and the body works around it.  That was an interesting answer at the time that didn’t make a lot of sense to me however, I was calm and floaty so it was ok.  They wheeled me in.

No music this time.  It was a large OR.  Maybe 10 people in there getting things ready.  A buzzing hive of activity.  I don’t recall if the surgeon greeted me.  Everyone had hats and masks and gowns.  The anesthesiologist did come over and started working on something.  I had met her the day before during different rounds of questions and meetings.  I had IV lines available so it was pretty easy for her to add stuff to my blood stream.  I’m sure I confirmed who I was multiple times through this process.  They want to make sure you are the right person and I’m glad.  There wasn’t any counting backwards, though.  The anesthesiologist seemed focused on something with my right arm.  And I was laying there.  I had been transferred to the operating table and they were adjusting it so I would be comfortable and not fall off.  And she was doing something with my right arm.  I wasn’t really sure what.  And then…

I was in a different place.  I knew ahead of time I would wake up on a ventilator.  I don’t recall the conscious thought “oh good, I’m alive” but I clearly was, so that was good.  Mostly things were confusing.  (And as I’m writing this from farther in the future, there are some specific details that have escaped me from this part).  There was a breathing tube and I was uncomfortable and my throat was dry.  The male nurse seemed to be indicating that I needed to control my breathing and work on taking deep breaths before they could remove the tube.  This male nurse in fact was the one single staff member who was unpleasant my entire hospital stay and after this shift, he mysteriously vanished.  Which was a plus and may have been karma.  But for now, I had to somehow learn to breathe slowly and deeply with a tube in me and in some discomfort.

Eventually I figured out how to do that to the hospitals satisfaction and the tube was removed.  Consciousness kept getting longer, too.  I was in a cardiac ICU where there is one nurse per patient.  Nurse station in the room.  I had lots of tubes and wires in me and there were a lot of machines going ping.  A blood pressure cuff would check my BP every 10 minutes or so.  The most interesting, and unpleasant part of this phase were the chest tubes.  It took a while for me to understand what was happening but if I moved the wrong way on my own or had to move in certain ways in order for something to be done to me, I would get intense rhythmic muscle pain in my chest.  Dear reader, I imagine you have had a Charley Horse before.  That painful muscle spasm in your leg.  I’ve often gotten them in my calves before.  Imagine getting one in your chest.  Your entire chest.  Except 10 times worse.  And you can’t really massage your chest to make it better (for all sorts of reasons there was no way I was going to even try).

The ICU isn’t really a family friendly place.  By that, I mean, the language.  Rather my language.  It is ok to express yourself there.  I believe a few in my party were surprised by my expressiveness.  But during these cycles of INCREDIBLY PAINFUL muscle cramps, I generally felt free to use whatever language seemed appropriate at the time, loudly, to express how I was feeling.  Over the next couple of shifts, I got more used to it.  And by this point, most of what was going through my head was “fuck yeah, I’m alive” and nothing really mattered compared to this.  And by getting used to it, I found that if I could get my body to relax, I could smooth the ends of the muscle spasms so they would eventually settle down. It would just take about 10 minutes to subside.  Each time.  Harder drugs were injected at times to help, too.  They helped to some extent.  It was somewhat entertaining except for being so INCREDIBLY PAINFUL.  I mean, I didn’t have much else to do.  And I was alive and really enjoying that part a lot.

I jumped a head a little.  After the breathing tube was out, I was ultimately curious where the rest of my group was.  Shift change was around 6pm-ish and grouchy nurse was replaced by nurse typical of the rest of the staff at Mercy General:  friendly, helpful, caring, and overall awesome.  While laying there trying not to move, by 7pm I asked if maybe nurse could call that phone number I could see on the wall for my mom and inquire where they might be.

As it turns out, grouchy nurse had told my group earlier in the day before I was conscious that he (me) wasn’t going to remember anything from today and you all should just leave and not bother coming back till tomorrow.  And anyway there are limited visiting hours in the ICU.  As it turns out, NONE of that was really true.  And upon hearing I was aware and conscious, everyone came back to visit for a bit.  By 8, my Mom, Stepdad, and Girlfriend had returned and we had a nice visit.  As much as was possible in my current state.

The night nurse was also able to to help with some of the times I had to move and it was painful using highly controlled medical grade substances that didn’t make me high at all because of the cycles of INCREDIBLY PAINFUL muscle cramps which were made slightly better as a result.

My CPAP got set up (I have sleep apnea) and by around 10pm everyone left and I was working on sleeping.  I dozed off and on.  The TV had a relaxation channel that showed dawn landscapes.  At some point I learned that a moose can eat up to 50 pounds a day of aquatic plants.  I thought that was interesting.  There it was, up to it’s neck in a lake.  Too picky for the grasses on the shore.

Through the night I was told how well I was doing.  I was a lot more aware than many people who have just come out of open heart surgery.  The INCREDIBLY PAINFUL muscle cramps really, really sucked.  But as I’ve said, I was really, really happy to be alive and past surgery.  After all, I was dead for 6 hours or so.  And then I was brought back.  So things should get better after that.  Luckily they have.